STARS— where the sky is no longer the limit

Home » STARS— where the sky is no longer the limit

STARS has become known as an essential emergency service in Western Canada—helping to provide critical care and transport countless critically ill patients to hospitals where they can receive life-saving care.

Captain Jon Gogan has been with STARS for 20 years. When asked about the relationship between Alberta Blue Cross® and STARS, he says that “We have our partnership with [Alberta Blue Cross®] but we also have a partnership through an employee benefit standpoint. It really does create a sense of oneness. We can’t do it without the support of everyone … if it wasn’t for that type of partnership, we couldn’t offer the service, the level of service, the level of aircraft and the nimble ability to make choices based on the best patient care we can give.”

Captain Gogan began his commercial aviation career in Northern Ontario, but when he was involved in a serious car accident in his 20s, he knew he wanted to give back with whatever he chose for his profession. So, when Gogan started flying a helicopter, it was clear that flying an air ambulance was the perfect fit. 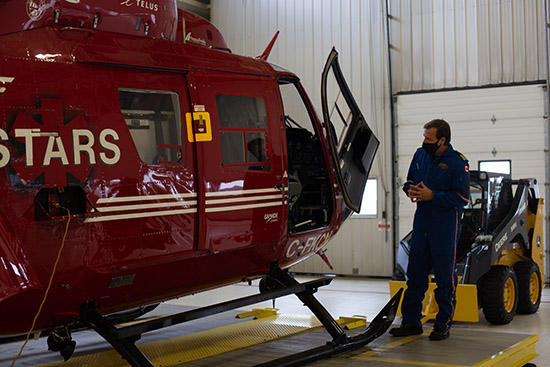 You would think after more than two decades in the business, the luster of the job would have worn off for Gogan, but after speaking with him, we can see it is just the opposite. Gogan clearly loves what he does and feels so grateful to be part of helping people day in and day out. One thing he loves about being a pilot for STARS is meeting patients and becoming part of their story, because unlike most industries or critical care facilities, STARS team members are often contacted by their patients and in some cases begin long-lasting relationships. Gogan is still in contact with a man his team flew at just 16 years of age who has grown up to be a father of two.

“In this job, you quickly realize everybody is interwoven and it’s great to be part of that fabric.”

“When you donate to STARS, you become part of somebody’s history. When you see that helicopter flying around Alberta you have become part of whatever that person’s health-care journey is. The way I look at it is that years from now, long after I’m gone, the grandchildren of some of my patients will be talking about their incident; we become part of that story. And that’s the biggest takeaway for anyone who donates to our organization—you may never know whose story you become a part of, but you are part of it.”

STARS carried out 1,436 missions in Alberta last year and has flown more than 45,000 missions organization-wide since its inception in 1985. Alberta’s helicopters generally fly about five times a day from three bases in Calgary, Edmonton and Grande Prairie. Half of the requests are generally scene calls from traumatic incidents, while the other half are flights to rural hospitals to provide patient transport to larger hospitals.

In the back of the helicopter, the medical crew is equipped with all the machinery and materials necessary to care for a critically ill patient. This includes everything from intubation tools and oxygen for COVID-19 patients to extra bags of blood for transfusions and ultrasound machines. All the equipment you would find in an intensive care unit can also be found in the back of a STARS helicopter. 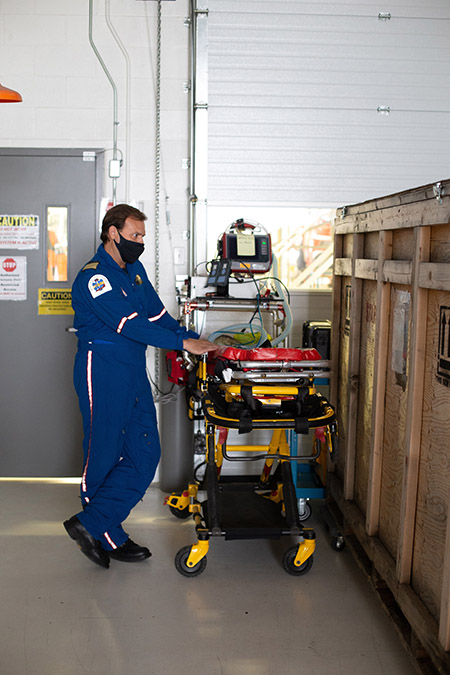 As the years have gone by, technological advances have helped make the equipment smaller, lighter and more complex. STARS is now beginning to see medical equipment that has WIFI connectivity. “It’s incredible where [the technology] is going. Our old ultrasound machine used to weigh about 20 to 30 pounds, but our new one is a teeny tiny scope that is attached to an iPad,” exclaims Gogan.

Getting the equipment needed for STARS helicopters and patients all comes back to donations. STARS is a not-for-profit organization and with the help of donations, they’re able to choose what is best for the helicopter environment as well as patient care.

To work for STARS, you need to have a tremendous amount of experience. The nurses and paramedics have been working in emergency rooms for at least eight to 10 years and have seen hundreds, if not thousands, of patients.

“Our care team will never tell you this because they’re extremely humble, but they’ve trained to the highest level in Canada.”

The team at STARS provides help for patients across Western Canada and partners with Alberta Health Services to help Albertans even in situations where the helicopter cannot fly due to maintenance or inclement weather. In several instances our critical care team have gone by ground ambulance or fixed-wing plane to assist patients who require critical care.

“If we can’t go by helicopter because of weather, we’re working to determine ways of going to a location by another means. That is the next evolution.”

Organizations, like STARS, are composed of individuals looking to do incredible things for the people of Alberta. Albertans deserve the best care possible, and that’s why Alberta Blue Cross is proud to be a sponsor of STARS for almost 20 years. Captain Gogan recognized the connection that all of us in this province share with one another. “In this job, you quickly realize that everybody is interwoven and it’s great to be part of that fabric.”